Please note that this event has been postponed until further notice due to the outbreak of COVID-19! 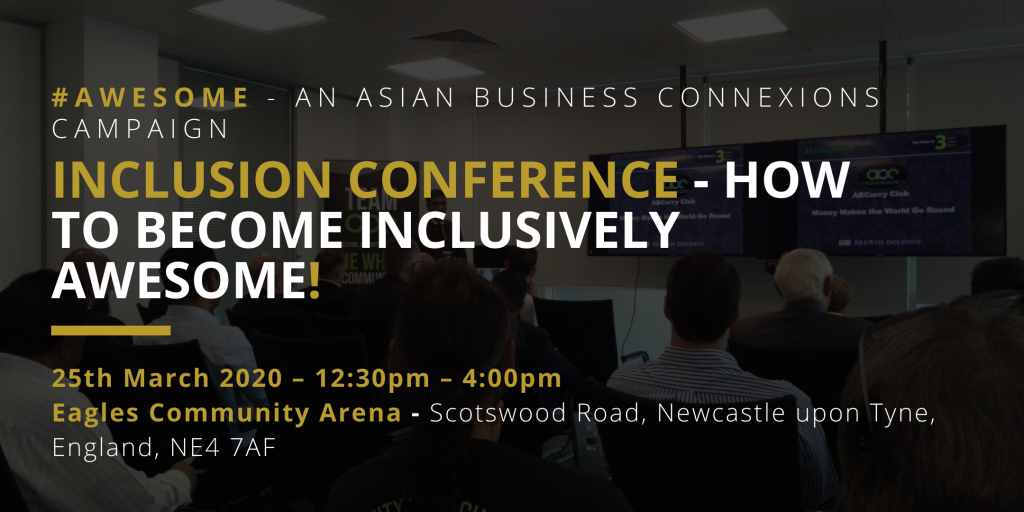 Do you want to become inclusively #AWEsome?

We are hosting an interactive workshop delivered by #AWEsome Women and Asian Business Connexions.

Our Asian Women Enterprising (#AWEsome) campaign was launched to recognise Asian females for their hard work and determination and to inspire others to achieve as these women have done.

This workshop aims to educate each individual about the importance of inclusivity and diversity as well as the barriers that the #AWEsome women have faced within their careers and personal life. A Q+A session with the #AWEsome women gives you the opportunity to ask burning questions as we also look forward to hearing from an equality expert – Ranjana Bell MBE and Nitin Shukla who will be saying a few words to explain the work undertaken at Northumbria Police to improve engagement and inclusion.

Ranjana Bell MBE has over 35 years’ experience in the field of Equality and Diversity. She has been a teacher for children with special needs; a Race Equality Officer for a local authority; an Equal Opportunities Officer for a university; a Non-Executive Director for a design company and has held the position of Director for her own company, rba Equality & Diversity since 1998.

In 2009, she was awarded a Lifetime Achievement Award for her contribution to Equality and Diversity by CULTURES CIC; in 2012 she was shortlisted for an Asian Women of Achievement Award for her contribution to public service and in January 2014 she was awarded an MBE in the Queen’s Honours for her work with the police and BME communities in Tyne & Wear and Northumberland.

Nitin is currently seconded to Northumbria Police to develop, manage and coordinate initiatives to make the workforce representative of the communities served by the force. Prior to the secondment Nitin worked as the Policy, Performance and Scrutiny Office in the Office of the Police & Crime Commissioner for Northumbria. Previously Nitin was the Diversity Officer for Gateshead Council, taking a lead for policy development and providing ongoing support to Members and Officers on equality and diversity.

Nitin was a member of Court from 2013 to 2019 and was appointed to Council in August 2019. He is a member of the University’s Remuneration Committee.

Nusheen is responsible for Home Group’s new product development, corporate engagement and marketing and communications. She has held several senior roles in marketing over the last 20 years, across various industry sectors including publishing, broadcasting, energy, financial services and construction.